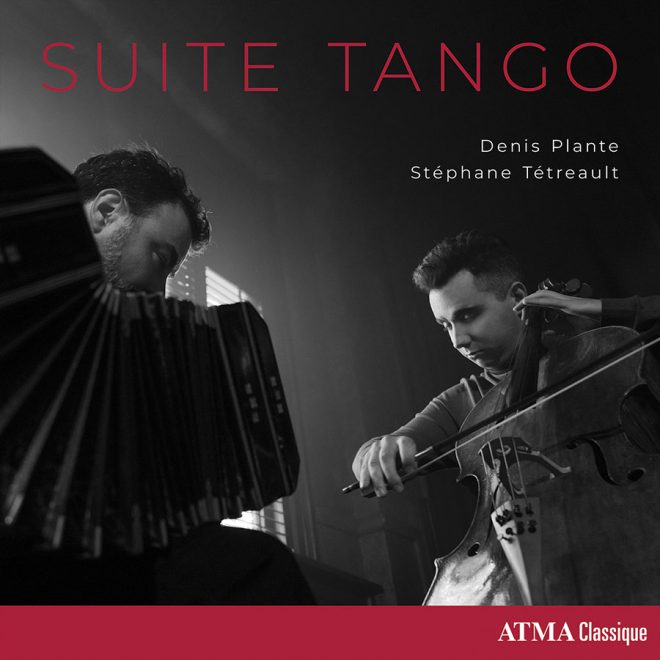 The Suite Tango abandons the archaic forms of ancient dances to draw on the roots of Argentinian popular music, the fertile ground which gave the tango its depth and the bandoneon its raison d’être.

The “Argentina” Suite presents a prelude in G minor which borrows its pulsation from the folklore of the land. It is followed by “Silbando” (whistling), a milonga-lenta which evokes the immense horizons of the Pampas. This first Suite ends with a nod to the Prelude in G by J. S. Bach. The second Suite, “Bach to tango”, begins with a three?voice chorale and ends in the exuberance of a “Milonga-cayengue”. The Suite entitled “Noche de tango” features a cello solo followed by a nostalgic tango-milonga and “Apache”, a dance with tribal textures. The “Las flores” Suite (The flowers) offers a prelude for solo bandoneon followed by a French waltz. The “Mística” Suite presents a prayer followed by an improvisation for an out of tune cello. The final Suite, “Buenos Aires”, opens with a waltz that evokes river shuttles dancing on the Río de la Plata followed by an old-fashioned tango preceded by a nod to the “Swan” from The Carnival of the Animals.

These melodies would have little meaning without the genius of Stéphane Tétreault, who instilled with overflowing generosity the pathos necessary to give each of them an overwhelming depth. Happy listening.

This project is truly remarkable: all of these compositions are new, yet we feel that they have always been there, they are natural to us. It is sadly luminous. Heartbreaking, even.

Plante's expressive strength and technical quality is no longer to be proven in this musical genre, but Tétreault's, whose strength we certainly suspected, is certainly very convincing. This music is made for him, you can feel it. More than an exercise in style, Suite Tango turns out to be, perhaps, Denis Plante's finest opus.